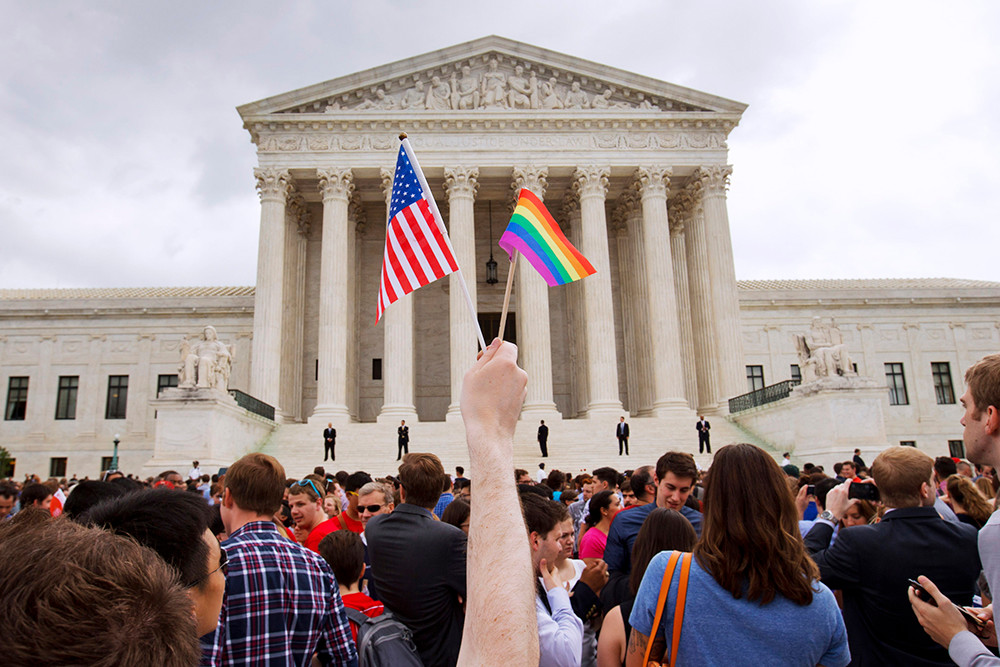 The United States Supreme Court significantly expanded civil rights protections for LGBT employees on Monday, June 15, 2020, when it published its opinion in Bostock v Clayton County, Georgia, 590 U.S. __(2020). Before handing down its opinion, the Court heard oral arguments from the three cases at issue on October 8, 2019:

Title VII of the Civil Rights Act of 1964 makes it “unlawful … for an employer to fail or refuse to hire or to discharge any individual, or otherwise to discriminate against any individual … because of such individual’s race, color, religion, sex, or national origin.” 42 U.S.C. §2000e-2(a)(1). The employers in this matter all admit that they terminated Mr. Bostock, Mr. Zarda, and Ms. Stephens because of their sexual orientation and transgender status. Additionally, the majority opinion of the Court agrees with the dissenting Justices that the term “sex” is meant to refer to the biological classification of an individual as male or female. So, the primary question before the Court is whether an employer’s admitted discrimination on the basis of sexual orientation and transgender status can logically occur without reference to or consideration toward one’s sex.

Justice Gorsuch delivered the majority opinion of the court, which interpreted Title VII to mean, “an employer who intentionally treats a person worse because of sex— such as by firing the person for actions or attributes it would tolerate in an individual of another sex—discriminates against that person in violation of Title VII.” For example, employers violate Title VII when they fire a female employee for expressing a sexual preference for women while retaining a male employee that expresses the same sexual preference for women. Regarding transgender status, an employer cannot fire a male employee for exhibiting traditionally feminine characteristics when they do not fire women for identical conduct. Applying this simple logical framework, the language of the statute is clear and unambiguous. Discrimination against one’s sexual orientation or transgender status cannot occur without reference to one’s biological sex in violation of Title VII. In response to dissenting opinions that the legislature of 1964 never intended Title VII to protect members of the LGBT community, the majority opinion concluded:

“[A]pplying protective laws to groups that were politically unpopular at the time of the law’s passage—whether prisoners in the 1990s or homosexual and transgender employees in the 1960s—often may be seen as unexpected. But to refuse enforcement just because of that, because the parties before us happened to be unpopular at the time of the law’s passage, would not only require us to abandon our role as interpreters of statutes; it would tilt the scales of justice in favor of the strong or popular and neglect the promise that all persons are entitled to the benefit of the law’s terms.”

What does this mean for employers?

Title VII of the Civil Rights Act of 1964 guarantees protection against discrimination on the basis of an employee’s race, color, religion, sex, and national origin for employees of businesses subject to its provisions (emphasis added). Businesses with fifteen or more employees are subject to Title VII requirements, with the exception of certain religious organizations and certain foreign employees working outside of the United States.

For businesses with fewer than fifteen employees, or businesses that are otherwise excepted from Title VII requirements, federal protections under Title VII do not apply, but they are still subject to state and local laws against discrimination. Currently, twenty-two states and the District of Columbia protect both public and private employees from discrimination because of sexual orientation and gender identity. States such as Michigan and Indiana only protect public employees from this type of discrimination.